This is my second time seeing All Time Low live but my excitement was extremely high than the first because I got Royalty. I WAS ABLE TO MEET THEM 😭😍

I hate con on weekdays, but I love ATL, so whatever, I was determined to go. Concerts usually start at 8PM but I left home at 7:30AM. LOL

My friend Samara, who is from Baguio, traveled to Manila for this so I was meeting her at our Head Quarter. They have a unit near the arena and it was really convenient for us to have a place to stay and just chill and keep our other belongings that are not really essential for a con. Bless the fam. But of course, traffic in South is sooooooo 🙃🙃🙃 I arrived 3 hours later.

I missed the HQ so much. The last time we were there was during Against The Current concert last year.

Surprisingly, Samara gave me a Wanderlust necklace. It was supposed to be a Christmas present, but we haven’t seen each other in ages. She was like “It’s from me and Ly.” I WAS IN VERGE OF TEARS. I LOVE MY FRIENDS. I wore it right away. Hehe I’m so in love with it. 😍 It can be used as a bracelet, too! 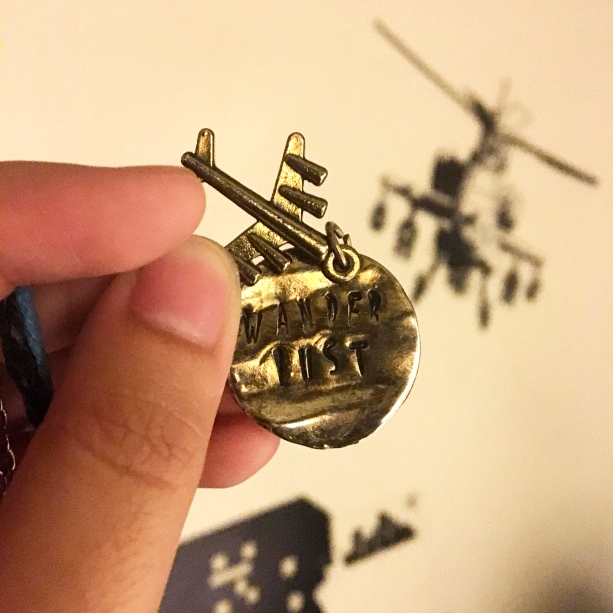 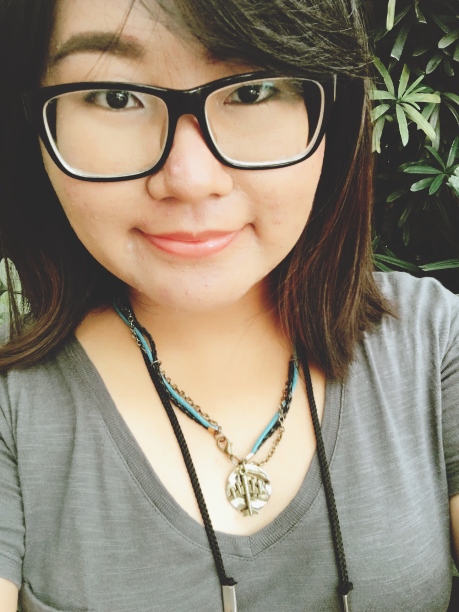 After we dressed up (not really) for the concert and put some make up on, we met up with Vic. She and Sam are part of All Time Low Manila so I also had to go with them and help them in their fan action (not that I did much 😁).

The Help Desk (HD) for Royalties (VIP Standing ticket holders with Meet & Greet) would open at 12PM. It gave us enough time to grab some lunch first. Vic didn’t want to go as she was already lining up for the HD.

Boy, I don’t know if you can call it lunch, but caffeine is a must for a long day and loooong night. I was disappointed, though. This cute barista spelled my name as Biena. REALLY. 🙄

After we ate, we got our Royalty perks which basically include a Pulp Magazine (which I already gave to my friend, France), the Pulp Royalty bracelet, ID, poster (which we haven’t got until after the concert because it is not allowed inside the Arena).

To be honest, we were too early to do anything. Some fans are not there yet given the day of the event. Most were probably still in school or work.

Here’s me with Marvi and Rachel. Samara and Vic were around and about as well.

We just kept on walking while giving out the things for the fan project.

This was for the Lower Box people: THE LIGHT PROJECT. Everyone in that section should have their phone flashlight on with this future hearts spade paper on it. This should create a sea of red and green color lights. The amount of effort they put on this is remarkable.

These papers were for the VIP section. Two years ago, during their concert, ATL promised that: “It won’t take us two years to come back.” That was on August 12, 2015.

Why? Did you think we’re not going to keep it?

Alex:“We’ll keep coming back as long as you are singing our songs.”

MY HEART. MY TEARS. I AM WEAK BUT SOOO ALIVE.

Going back to the pre-concert, Meet & Greet started at 4PM. They were on time, mind you. We were all pretty chill at first. We lined up to the last hoping we could have more time with them. Sneaky, right? Hahaha! But it was still all very sudden. There were people crying and jumping around that we lost our chill all the same. I couldn’t breathe. My heart dropped in my stomach, if that’s possible. There were also  million of butterflies in my entire body.

When we entered, I really lost focused. The bouncers and staffs always overwhelm me. To add up to my trembling self, I couldn’t believe All Time Low was real. They were tall, obviously.

Jack was the first person I shook hands with. Then, Rian. I stood still in Alex’s side but I reached out to Zack which he didn’t notice at first! Everything was a blur. The next thing I knew, staffs were telling us to look at the camera.

After the shot, I turned to Alex and handed him a piece of paper where I wrote two of my poems. I told him I wrote him a poetry. He said thank you and put it in his pocket (I didn’t see this but Marvi tell me that he did). So, here’s me still wishing he’d read it or something.

By the way, it shouldn’t be called M&G. It’s just literally a PHOTO OP. I was still happy, though. At least I got to see them that close.

To meet one of your favorite bands is one thing but to meet them with the best people, it gets more infinite 💙

Pulp Royalty perks, we got to go inside the arena before all the sections. Yes, we’re in (side) front. To be honest, I hate mosh pit. Rachel and I stayed in the barricade. I didn’t want to go to the middle. My height is not really for it. Samara and Marvi chose a better view (I guess) but they were pretty squished once everyone went in.

We didn’t take much photos but here’s Rachel and I settling ourselves, preparing for the battle of pushing and shits, in the barricade. Our feet already in pain.

We were inside at around 6PM and the show wouldn’t start until 7. CAN YOU IMAGINE THE STRETCH OF TIME IN THAT TINY SPACE WE WERE AT. Good thing though, when I turned to look if the other sections were filling in the arena, I saw a familiar face at my back. I kept thinking “I know this girl somewhere.” AND YES, I DO! I know Kits for quite a while, but I haven’t really met her yet.

I have this Filipino 5SOSFAM I’ve been attached with since 2013. I am always over the moon when I stumbled onto the members randomly. She’s such a pretty lass, isn’t she?

As It Is opened the show at 7:30PM. I don’t really know the band, but I took one footage of them which I included in my video edit. I could hear Kits at my back singing along with the band. What a cutie.

A couple minutes after 8, All Time Low started their set. I was immersed by the time the lights went off and video clips played on the screen up the stage. I have missed the feeling of screaming along with the crowd with all my heart.

ATL kicked it off with Last Young Renegade. I wouldn’t go into details of the set list. I didn’t take that much videos as well. I’m proud to say that I LIVED IN THE MOMENT. I was just happy singing along to the familiar songs (especially from their old records) that I’ve been listening to since High School.

My favorite talk of Alex was probably this time he asked us to tell our friends about them. The crowd roared in agreement. But when he asked if we would tell our parents about them.. LOL For the younger teens, it’s DEFINITELY NO.

My favorite moment during a concert is when the vocals will stop singing for the crowd to chant, scream, and shout certain lyrics. Missing You and Therapy never fail to make me want to crawl back inside my mother’s womb where I can possibly feel the safest and just weep there. Haist. Feels.

Most of the time, we were being pushed and my whole body hurt. Have I mentioned I hate mosh pit? I DID, BUT YES, I’M SAYING THAT AGAIN. I wouldn’t really go in it if it wasn’t for the Meet & Greet. Anyway, as I was saying, mosh pit is where you should JUMP AND DANCE AROUND. NOT TO FUCKING PUSH AND PUNCH PEOPLE TOWARDS THE BARRICADE.

I’m sorry to disappoint, but I don’t like a stampede. If it weren’t for ATL smiles while performing on stage, it’d probably a bad night. Judge me, fight me, whatever. I saw them again live and that’s all there is to cherish.

It isn’t an ATL concert if:

1. There are no bras flying its way to the stage

2. They don’t end it with Dear Maria.

Here’s a very few pictures of them on stage:

Us after the concert: 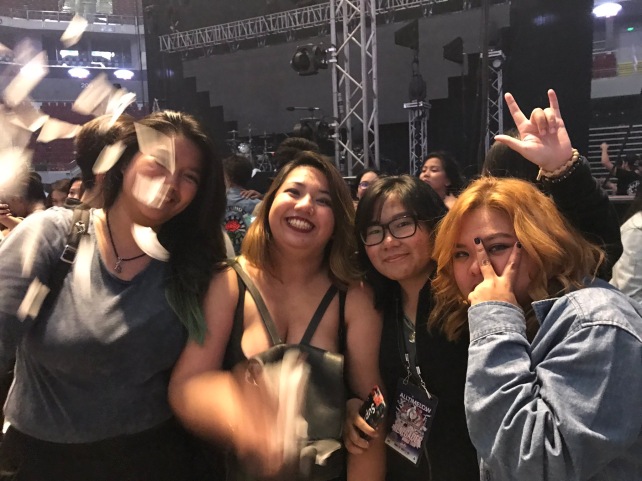 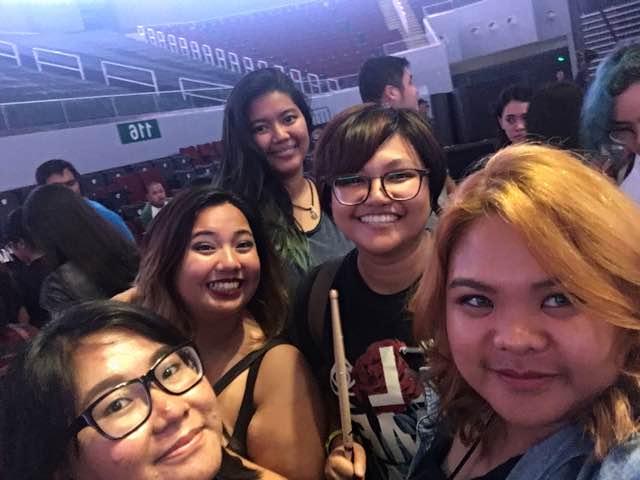 What I also love about cons is that I could meet some of my friends who also watched the show. They were all from Filipino 5SOSFAM so were already pretty acquainted. It’s awesome to think that these people who keep you company are the ones you only met online—through same interests and passion. It was nice bumping into you, France, Migz and Eirian! 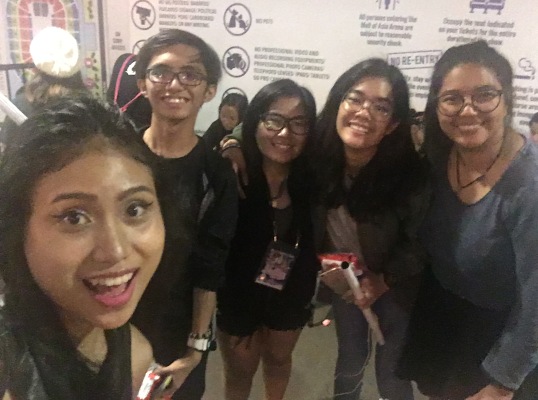 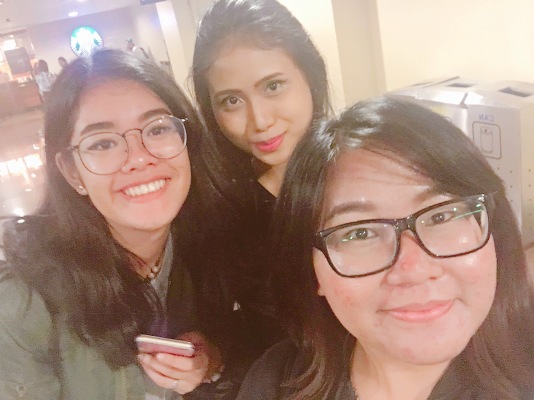 This next picture is special. Meet my friend, James. He’s the most multifandom you’d ever meet. We were at ATL in MNL 2015 and it was nice to have him again this year. Look at the difference of the pictures in 2 years time:

The next day, my everything hurt. LOL I even had bruises. Damn violent people at the mosh pit. Still, I went to work. Legend.

I tweeted our M&G picture and guess what???? JACK WAS THE FIRST ONE TO LIKED IT! I WAS SHOOKT! THEN ALEX LIKED IT, TOO! HOW IN THE WORLD????? Boy, I am blessed.

What’s your favorite concert so far? I hope your singing well with the melodies of life. XX