I feel like sometimes, people should be respected just for being alive and existing.

This is one of those nights that I hope my words won’t fail me. I am a whirlpool of emotions right now. I need to let this out.

I will never get used to being okay one minute and breaking down next.

Last weekend was great. I got to finish all my papers—from case studies to rewrites. I even liked myself at that moment. I felt so accomplished. I felt the fulfilment way too much I spent the night crying. It was that good.

Monday morning was hopeful. I love the cold weather as it matches what I feel inside perfectly. I love wearing hoodies and over-sized sweaters. Also, the rain makes a cup of coffee even better. It was a productive day at work. It was okay. Until it’s time to go home.

Normally, it excites me to clock out. Not this time. I don’t know what’s wrong. I just felt that sadness inside me again.

You know how your heart beats fast and there’s a kick of intuition telling you that something bad might happen? It felt so bad that you can’t even breathe? I really can’t explain it because it doesn’t make sense to me, either. It’s just there.

I tried not to focus on myself so I watched my surrounding as it passed me by.

Of course, the lights are pretty. They are everywhere because it is this season. That just made me feel worse. They are too beautiful that tears started to fall down. I can’t have an episode inside the UV, right? That’d be so humiliating. I tried to control it and just scrolled through Twitter instead.

It was a bad idea.

Jonghyun’s death was all over my timeline. Apparently, he committed suicide in his apartment. Before he did, he left a message to his sister. Suddenly, it got even harder to breathe.

I needed water, but I was in a moving vehicle. I didn’t have anything with me. I tried to control myself until I got home. I was thankful to Junice and Melanie for trying to reach out and making sure I was okay.

I made it home safe, but my whole body was just so numb.

Whenever there is news about suicide, it always always always makes me sad. It breaks me. It’s just too painful.  Ah, scratch that. Actually, most of us do.

We are all different but most of the time, we only want one thing—to stop the pain; to be happy but sadness was too strong; to hold on to the light but the darkness was too persistent.

I have never been this triggered. Maybe because of that message he sent to his sister. I remember that night I did the same thing.

I couldn’t imagine the horror of what his sister is feeling right now and everyone dearest to him. I was too mortified that I caused that kind of feeling to my family too. I would forever be sorry.

But, can I blame Jonghyun? No. Do I think it’s okay that he left the world that way? No. Suicide is never the answer, but I don’t think we should question it, either.

They don’t understand because “he is famous,” “he has a concert coming,” and whatever more bullshit. Depression chooses anyone—it doesn’t matter what your status is. Anxiety attacks happen at any time of the day. It doesn’t care if you’re in public or alone in your room.

I’d like to say that people who never experienced it won’t understand, but I hope that’s not the case. I think you can understand if you will only listen; if you will only realize how much it weighs. But most people choose not to. Do not be one of those people.

And so I tweeted: “you don’t question suicide pls shut up”. Hence, the title of this blog. Not long after the tweets and replies that tweet got, it has been deleted.

I still don’t know how to wrap my head around this issue because I feel more about it more than I think about it. It’s hard because I understand. We can only hold so much.

If you are reading this and you are also suffering, you are doing great. One step at a time. You can do it.

Can I consider Jonghyun weak? For not fighting the battle well? For choosing the “easy way out?” For “not winning”? I think not. He fought well. He already suffered more than he could bear.

In fact, I think he was strong enough to leave. To choose death is probably scarier than living. What happens next? Where do you go? Can you save your sad sad soul if you take your own life? Can you find happiness there? Wherever that is. We don’t know any of that. And choosing uncertainty can sometimes be a form of bravery.

Is he selfish? Maybe. I don’t really know if I can call him that. Is it bad to make the pain stop? Is it bad to choose yourself even just this once? Maybe. But, did he really choose himself? Isn’t choosing life also means choosing yourself?

Let that sink in and I hope you always choose yourself—yourself that is alive, breathing, striving, dreaming.

I think Jonghyun served his purpose well. He saved so many lives creating music and even after his last breath, he is still saving us. It’s a wake-up call for all of us, especially in South Korea. With their current percentage of suicide cases, it’s about time they do something. It’s about time we all do something.

Jonghyun did well. He really did well. I’d like to say that I just hope everyone around him has shown him enough his worth but that would be haunting. There is no one to blame. At the end of the day, it was his decision. It would always be.

I’m not going to tell you to not kill yourself because “it’s a sin”. Fuck that. People should stop saying things as if they are pure. Not everyone lives with a religion but that doesn’t mean he is not living well. This is not about faith anymore. This is about actions, choices, and decisions. You are not doing your best effort to wake up every morning just to wait for a miracle to happen. No, you make the miracle. You make your own fate.

Jonghyun, it was a well-fought battle. I’m so sorry you had to suffer. I hope you are no longer hurting now. 잘했어.

There is literally nothing in nature that blooms all year long, so do not expect yourself to do so.

I started writing this last night but I wasn’t able to finish because it was just all too much to take in. This is probably the hardest one to write among all the other things I’ve written.

Also, I’d like to apologize if my posts have turned so depressing the past months. It’s just that.. ber months make me feel these things that I can’t even explain. As the year ends though, I hope that I’ll feel better and hopefully I can go back to writing things that are uplifting enough to help you get through the day.

I hope you are all doing well. You don’t need to worry about me. I’m fighting my battle just fine. I believe in myself. You should believe in yourself too.

Love yourself. You matter. I love you and I appreciate you. Keep going; 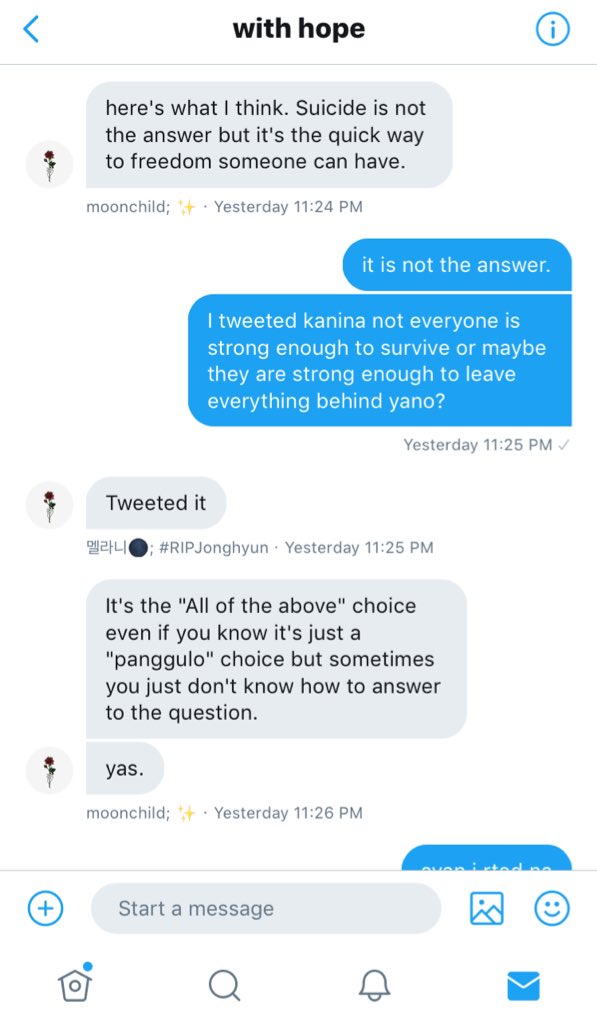 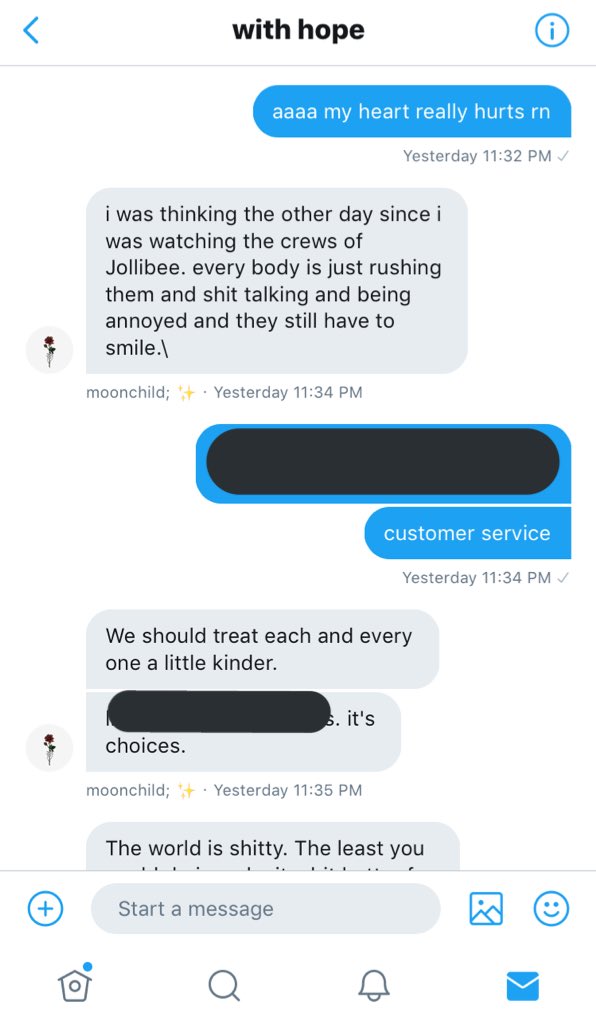 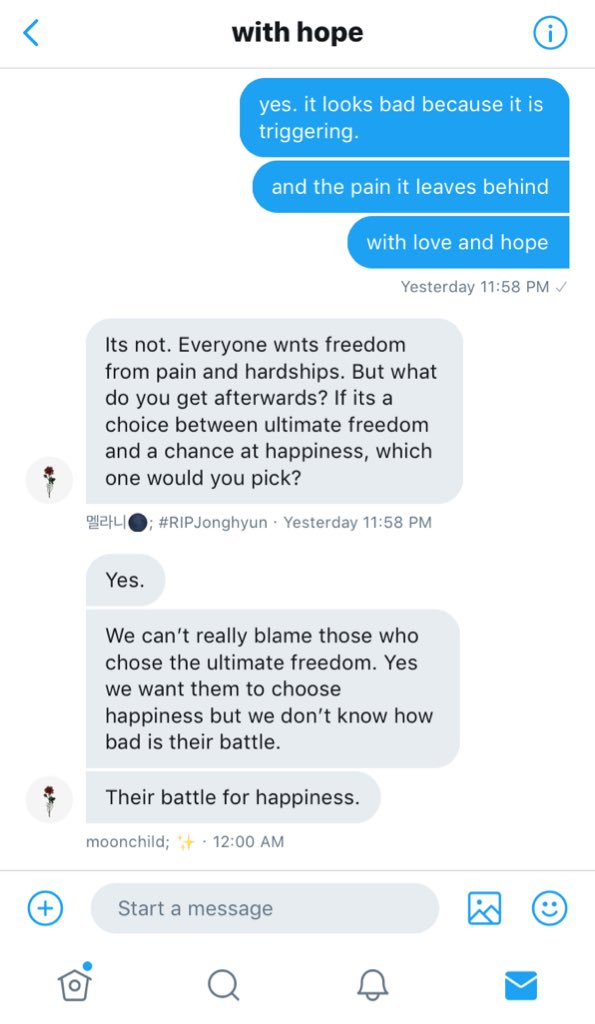 6 thoughts on “You Don’t Question Suicide, Please Shut Up”